Peltier elements provide two parallel ceramic plates between which a large number of so called peltier pellets are located. These pellets are made of semiconductor materials and contain rather exotic materials as Indium, Bismut and Tellur. When an electric current flows through the pellets, a temperature difference is generated at their contact surfaces. By this one side of the peltier element is cooled down while the other heats up. 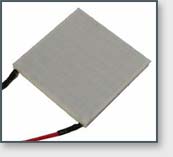 Due to the used lot, peltier elements have a certain maximum operation temperature, which must not be exceeded. In order to protect the element from the environment, some of our peltier elements can by supplied with a protective sealing.

Peltier elements often generate tempertures lower than the dew point (the temperature, at which atmospheric moisture condenses). The perspiration water can cause corrosion, which destroys them.

Peltier elements should therefore be used in a protective gas, whose dew point is under the lowest by the peltier element reachable temperature.

In case there is no possibility for using a protective gas, it is advisable to seal the margins between the two plates of the peltier element.

The sealing of the peltier element protects primarily against condensation water but additionally against contamination. Because of the additional heat conduction of the sealing adhesive, the efficiency is slightly deminished.

Eureca uses permanently flexible adhesive based on polyurethane for sealing peltier elements. The adhesive is hygroscopic and polymerises by humidity. Therefore, it is ensured that the remaining air in the interior of the peltier elment is as dehumidified that a condensation can be excluded over the full specified working temperature range.

Here you can easily ask a question or inquiry about our products: